JACKSON – A developer is preparing to break ground on a nearly 150-acre project next to Six Flags Great Adventure that will include a Hilton Garden Inn hotel and sprawling sports and entertainment complex.

Vito Cardinale said the $21 million project off Interstate 195 on Monmouth Road will help turn the theme park into an attraction for more than just day-trippers and Jackson into a bigger destination.

“Six Flags on its own could not have justified that hotel, or else it would have been built (by now),” Cardinale said. “They needed a destination.”

More:Don’t book a room in Jackson quite yet: Bergmann

More:Great Adventure: Where is the promised growth?

POLL:Will project near Great Adventure be net benefit for Jackson?

If it comes together, the Shore’s tourism officials can finally check off an item that has long been on their wish list.

“It’s long overdue to have a hospitality facility there,” said Ben Waldron, executive director of the Monmouth-Ocean Development Council, an economic development group.

Cardinale Enterprises finalized a deal with Hilton Garden Inn to operate a 134-room, five-story hotel. The developer has been approved for a second hotel on that site, but has yet to announce the brand.

The hotels will join Adventure Sports & Entertainment, a project on 87 acres that is expected to include an 89-foot-high, 117,000-square-foot sports bubble.

It also plans to have four outdoor turf fields that can be used for games.

“There’s really not too many places you can go in New Jersey and have a fully enclosed facility like that.” Cardinale said. “You have pieces of it. Many areas around New Jersey. But there’s really not one place that’s got it all.”

Cardinale, 58, lives in Millstone, and was the driving force behind the Linda E. Cardinale MS Center at CentraState Medical Center in Freehold Township in honor of his wife, who died five years ago after a battle with multiple sclerosis.

He has run into opposition, too. Manalapan residents rallied to turn back his proposal for Manalapan Crossing, a project that called for stores, medical buildings and 600 apartments.

Previous: Manalapan Crossing project off the table — for now

Cardinale said the hotel and sports complex is eight years in the making.

A former resident of Staten Island, Cardinale would visit Six Flags Great Adventure and leave wondering why there wasn’t a hotel nearby.

He wasn’t alone. The amusement park has had a hotel on the drawing board since it opened in 1974. And it seemed to make sense: Six Flags Great Adventure, with easy access to the New Jersey Turnpike, the Garden State Parkway, attracts upwards of 3 million visitors a year, according to the Themed Entertainment Association.

More:Theme parks: How to save money this summer

But its surrounding land has remained largely undeveloped — aside from a Wawa, Burger King and McDonald’s.

Cardinale thinks the timing is right. Six Flags, once a summertime amusement park, has extended its season with Halloween and Christmas events. And Adventure Sports & Entertainment can tap into a giant youth sports market, bringing families to town.

Not that it is a done deal. Cardinale said he’s raising money from traditional banks and private investors.

But he is confident enough for his company to begin construction on the $9 million infrastructure improvements without taxpayer money. He plans to complete the project in two years. 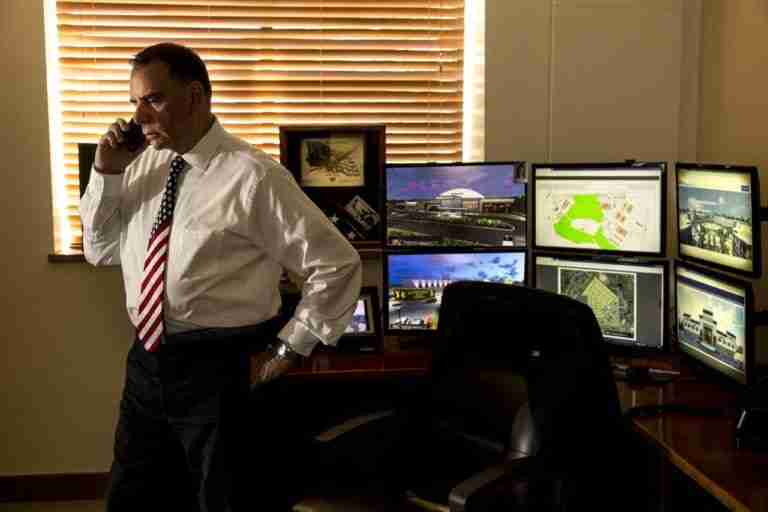